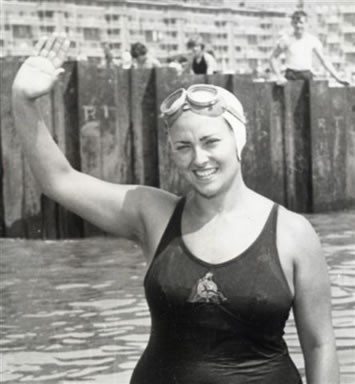 It is with great sadness that we have to report the death of Montserrat Tresserras who passed away on Monday 26th November in Olot, her birthplace, at 88 years old .

Montserrat Tresserras was an Honour Swimmer from Spain who was inducted into the 1970 International Marathon Swimming Hall of Fame. She was a pioneer of many marathon swims and was the first Spanish woman to swim the Strait of Gibraltar in 1957 in 5 hours 18 minutes. She was the first person from Spain to swim the English Channel in 1958. In 1961, she again crossed the English Channel in the opposite direction from England to France to become the first women to swim the English Channel in both directions. In 1969, she swam the Menorca Channel from the island of Menorca to the island of Majorca in 21 hours and 10 minutes and across Lough Neagh in 16 hours and 13 minutes. She also swam from Santa Fe to Corronda in Argentina and from Concordia in Argentina to Columbus, Uruguay.

For many years she served on the Board of Directors of both the Channel Swimming Association and the International Marathon Swimming Hall of Fame, was the CSA’s International Representative for Spain and a CSA Vice President. She acted as an official observer on many attempts to swim the English Channel and the Strait of Gibraltar and was particularly keen to always be available to help swimmers from Spain.

In 2011 she received the Real Orden del Merito Deportivo awarded to her by H.R.A. Infanta Cristina representing the Spanish Government. The Royal Order of Sports Merit is the highest distinction awarded to sportsmen and women in Spain. It is granted annually by the Government of Spain through the Superior Council of Sports.

She was the subject of Montserrat Tresserras, la vencedora del canal, a book published in 1959. She is also the author of Nadando El Estrecho, Sus Orígenes Y Su Historia (Swimming the Strait, Its Origin and History), an authoritative book on both swimming the Strait of Gibraltar and the swimming career of Mercedes Gleitze.

In 1993 she presented the Channel Swimming Association with the Montserrat Tresserras trophy to commemorate the swim of the first swimmer from a new country and in 2006 she presented the Montserrat Tresserras Shield, an award given annually by the Channel Swimming Association to the Fastest Men's Relay (not 6 swimmers) in the Englsh Channel.

Our thoughts are with Monty's family and friends at this sad time.