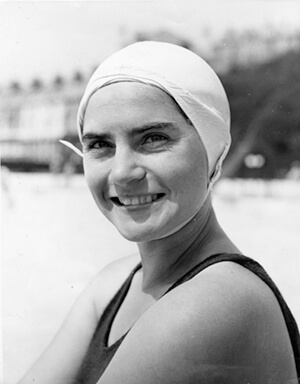 THIS year will be a special one for a lady from Dewsbury who celebrates her 90th birthday in June, and you don’t have to guess who she is. Just one look at this iconic picture and you know immediately I am referring to channel swimmer Eileen Fenton, who is renowned in the world of swimming.

Amazingly, this lovely lady, can still step into the swimming costume she wore (the one pictured) when she swam the English Channel almost 70 years ago. This simple black costume is now regarded as an important part of swimming history, and as such is being stored away in a hermetically sealed cabinet by Kirklees Council to prevent any deterioration. Promoted by Visit Utah Many of our younger readers will know little or nothing about Eileen’s epic channel swim in 1950, but at the time it was a sensational story which the world’s media was following day by day. Eileen, a 22-year-old schoolteacher from Thornhill Lees, was one of 24 swimmers from all over the world taking part in the first International Cross Channel Swimming Race, sponsored by the Daily Mail.

Only nine of those swimmers finished the race, but it was Eileen who was the first woman to finish, and for this fantastic achievement she picked up the prize – a cheque for £1,000. The public fell in
love with this attractive young woman, who weighed only eight stone and stood just five-foot-tall – the
smallest swimmer by far to take part. News that she was the first woman home in this gruelling race was relayed on Pathe News broadcasts in cinemas throughout the country. More than 15,000 people crowded into Dewsbury town centre to welcome her home, and 3,000 waited outside her home in Ingham Road, Thornhill Lees, to greet her. A massive street party was held in her honour in the village. But what people never knew at that time was that she had been offered a substantial sum by the makers of Horlicks – the drink Eileen drank during training – to fly out to America to be part of a major advertising campaign. They insisted she would have to go immediately after the swim, but Eileen refused knowing that the people of Dewsbury were waiting for her back home, and she would not let them down.

Much has been written about Eileen’s channel swim, but very little about her incredible coaching career. She was secretary for many years of Dewsbury Swimming Club, during which time she trained scores of first-class long distance and sprint swimmers. Some of the sprint swimmers took part in Commonwealth and Empire Game, the first of these being Dewsbury girl Jean Oldroyd, who competed in the Empire Games at Cardiff. Her most famous long-distance pupil was Wendy Brook, of Ossett, who, at the age of 20, broke the world record – for both men and women – for swimming the English Channel in 1976. It was an incredible achievement, and now 40 years later, Wendy describes Eileen as a “swimming coach and mentor beyond measure”. She told me this week: “All these years later I am still in awe of Miss Fenton’s selfless dedication and incredible contribution to the world of swimming over several decades. “Without her supreme coaching expertise, knowledge and understanding of open water swimming and her unfailing support, I would not have achieved my ambition to swim the English Channel, let alone set up a new world record. “Over many decades, Miss Fenton dedicated her life to her swimmers and to her swimming club in Dewsbury, and in
doing so made a significant difference to generations of children, teenagers and young adults in
Dewsbury.” One of the teenagers Wendy mentioned was not a long-distance swimmer but part of
Dewsbury’s Water Polo Team, and he still remembers the encouragement she gave him and many more who entered Dewsbury Baths. The teenager in question was rugby league legend Mike Stephenson who recently retired from his position as RL commentator for Sky Television. He told me he will never forget the guidance and support Eileen gave him when, at the age of 15, he joined the water polo team. “I will always remember Eileen’s words to me, words which lifted my spirit and gave me the confidence to strive for success in life and in sport. “She used to say to me –‘Keep working hard, don’t give in... you can do it’ – these were wise words from an amazing lady, and I have never forgotten them. “As a youngster growing up in Dewsbury I can still remember walking into the foyer of Dewsbury Swimming Baths and being in awe of the wonderful oil painting of Eileen, painted in recognition of her outstanding achievement of swimming the English Channel. “That painting provided me with the inspiration to strive towards a better life and to understand that through hard work and extra effort you can aspire to become successful, not only in sport but life in general.” Eileen celebrates her birthday in June, and I am sure that many Dewsbury people would love to send their congratulations, and I would be happy to pass them on if they send them to me. Eileen now lives in Wakefield, the town she had to go to over 40 years ago when she took up a teaching role at a school there. But she continued to visit Dewsbury nearly every night to coach her swimmers in the Dewsbury Swimming Club.

She is still very active but had to give up swimming some years ago because of an ear infection, but she has replaced swimming with ballroom dancing most nights of the week. She has always made herself available to support local charities and to speak to schoolchildren about her swimming career and says she will never forget the people of Dewsbury who raised the money which made it possible for her to do the swim. Read more at: https://www.dewsburyreporter.co.uk/news/the-nostalgia-column-with-margaret-watson-1-9072562