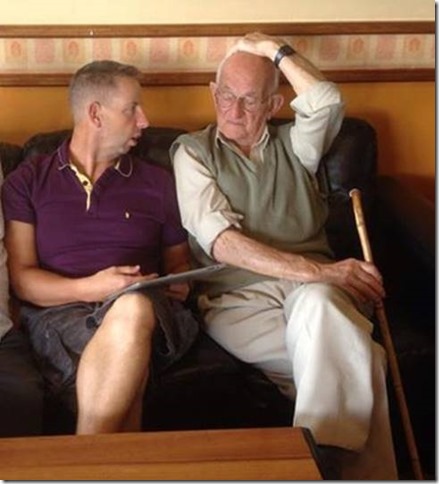 Tom Watch shown above with one of his swimmers Marc Newman.

It is with great sadness that we have to report the death of our Vice President Tom Watch who passed away earlier today after a long period of ill health. His working life, for many, many years was as a local Weymouth postman. But his love was small boats and the open sea.

Tom’s introduction into channel swimming in 1951, came under the supervision of Sam Rockett, the Manager of the Folkestone Lido and coach of England swimmer Godfrey Chapman in The Daily Mail Festival of Britain Cross Channel Race. He went on to touch the lives of so many swimmers and each will have their own memories of him. Tom continued as coach / observer or helper on over 100 solo and relay swims. His next Channel swimmer was Gregory Schofield in 1964. Some of his most memorable swims are –1965 coach to Philip Gollop at 16 years, he became the youngest person to date making the crossing. He was quickly followed in 1967 by Merv Sharp, who went on to make 7 crossings and become King of the Channel. In 1967 he became a life member of the CSA. 1981 he was the Observer/helper, accompanied by Father Ted and Rosemary George, on Jon Erikson’s epic 3-way crossing. In 1982 he was coach to Jacqui Hampson who became the youngest female at 13 years. In 1983 the record was beaten by Samantha Druce, 12 years old, also coached by Tom. In 1986 Tom was inducted to IMSHOF, he also got Marc Newman across in the fastest time of the year, making Marc the winner of the Rolex watch. In 1993 he was coach to Haydn Welch, the first person to complete the Channel Backstroke and so his list of successes continued, rounding off the most memorable swims, with his top swimmer over many years, Marc Newman – who, in 2016, completed the first ever crossing of the English Channel from Dungeness, Kent – Boulogne-Sur-Mer, France.

We send our deepest condolences to his daughter and family.