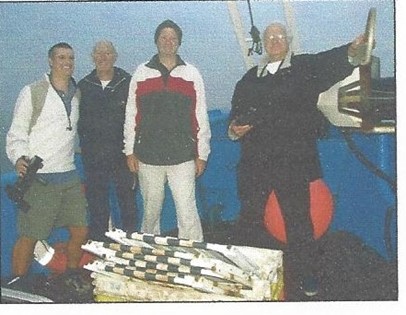 It is with great sadness that we report the death of Roy Naisbitt at the age of 90. On behalf of all of us at the Channel Swimming Association, we send his family our deepest condolences.

Roy was a great friend of the Channel Swimming Association, of long distance swimming and especially, waterpolo. He travelled with the Enfield Water Polo Club when it toured Hungary in July 2017 – 87-years-young at the time – and watched the Water Polo Worlds Championship in Budapest. Our President had the pleasure of swimming with him on a number of occasions. It was always one of his ambitions to swim the Channel and it was indeed absolutely wonderful, when the TRIP relay, (T for Ted Gerald, one of his work colleagues, R for Roy, I for son Ivan and P for son Paul) got across in 2002, in 15 hours 19 mins and then, the icing on the cake, when Paul did his solo in 2003. Again, in 2006, he was back in the Channel with the Peter Lloyd relay, successful in 14 hours 06 mins. This was the relay when a chaffinch was discovered stowing away amongst the fishing gear on Viking Princess. Roy was immensely proud of these achievements and it must have been a very great comfort to him to know that his family was so supportive of the things that meant so much to him.

(Roy is on the right in the photograph)

He had the most incredible mind and coupled with this, the fantastic ability to be able to draw and to express his thoughts in the ways that most of us can only dream of. In simple terms, he would describe himself as a technical animator, but in actual fact, he was simply “extraordinary”. He worked on some of the biggest films of the 20th century and his work can be seen in “2001, a space Odyssey”. He worked on ‘The Thief (and the Cobbler – designing and doing much of the ‘architectural stuff’ and the “War Machine” sequence. Roy was responsible for the layout work for the opening Maroon cartoon in “Who framed Roger Rabbit”. Later, Roy did layout at Amblimation on “Balto”, later still, he worked on “Space Jam” and in retirement he worked on Neil Boyle’s wonderful animated short, ‘The Last Belle.’ All the sequences above can be found on “You tube”.

It is with great sadness that we say good-bye to another loyal supporter and such a talented man.