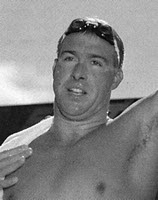 Chad was already a very accomplished swimmer before he came to the CSA, having been honoured as the USA's open water swimmer of the year in 1991, 1993 and again in 1994. He had also won the IMSA/FINA World Series championship three times.

He was inducted into the International Swimming Hall of Fame in 2012.

In 1993, he set the Catalina Channel record at eight hours, 14 minutes from the island to the mainland. When Chad decided to swim the English Channel in 1994, he didn’t set out to break the record that his coach Penny Lee Dean had set 16 years earlier, he said, “I just wanted to get across,”. But break her record he did, streaking across the shipping lane from Dover to Cap Gris Nez, in seven hours and 17 minutes, a great swim that knocked 23 minutes off Penny’s record. “You couldn’t ask for a nicer person to destroy your record” she said.

His school motto was “Great Beginnings Lead to Great Finishes” and when he failed to make the 1988 US Olympic Team, it was a blessing in disguise as he turned his attention from the pool to open water swimming. Chad became one of the world’s best marathon and open water swimmers in history.

We send our deepest condolences to his family as we say goodbye to the fastest swimmer we have ever had the pleasure of helping across the Channel.