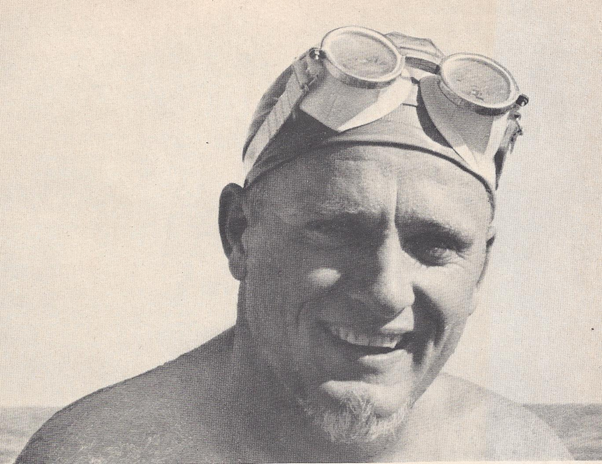 It is with great sadness that we have to report the death of Channel Swimming Association Vice President Dr. Ted Erikson. Ted was an academic as well as one of the greatest pioneer open water swimmers. He started his swimming career by swimming across Lake Michigan,

On August 22, 1961 at 8 a.m., five local swimmers and one professional entered Lake Michigan, off Chicago's McCormick Place, to swim to Michigan City, Indiana. The first to retire at about 4 miles was the professional, Mary Margaret Revell. Dennis Matuch decided the waters were too rough for the distance and retired after about 6 hours. Elmer Korbai and the two Simicek sisters hung on into darkness and stopped at about 27 and 29 miles, respectively. Ted Erikson, who up to then was in 4th place, moved to first and slowly struggled to complete the remaining distance for his first success at age 33 as an open
water marathon swimmer in a time of 36 hours and 37 minutes. In 1971, his son, Jon, at age 16, crossed Michigan City to Chicago in 24:30, breaking his record.

A few years later in 1965 he became the second person to swim the English Channel two ways in 30 hours and 3 mins. Today we rely on SAT NAV for almost everything but as far back as 1964, Ted became the first person to try to apply computer technology to swimming the Channel. His theories were treated with some scepticism at the time and although his efforts that year were not successful, (he completed a one way E/F in 12 hours 35 minutes), in 1965, assisted by Reg Brickell Snr. he made his successful attempt. In 1979, Jon, at age 24, completed his 2 way swim in 22 hours 16 minutes. In 1981 Jon went on to complete the first ever 3 way swim in 38 hours 27 minutes.

Ted swam alongside Dennis Matuch, Greta Andersen and Abdel Latif-Abo Heif and was one of the greatest pioneers, an inspiration to all who met him and will be sadly missed. Thankyou, Ted, for everything you did for our sport.

The President, the Board and all the members of the Channel Swimming Association send their deepest condolences to his family.