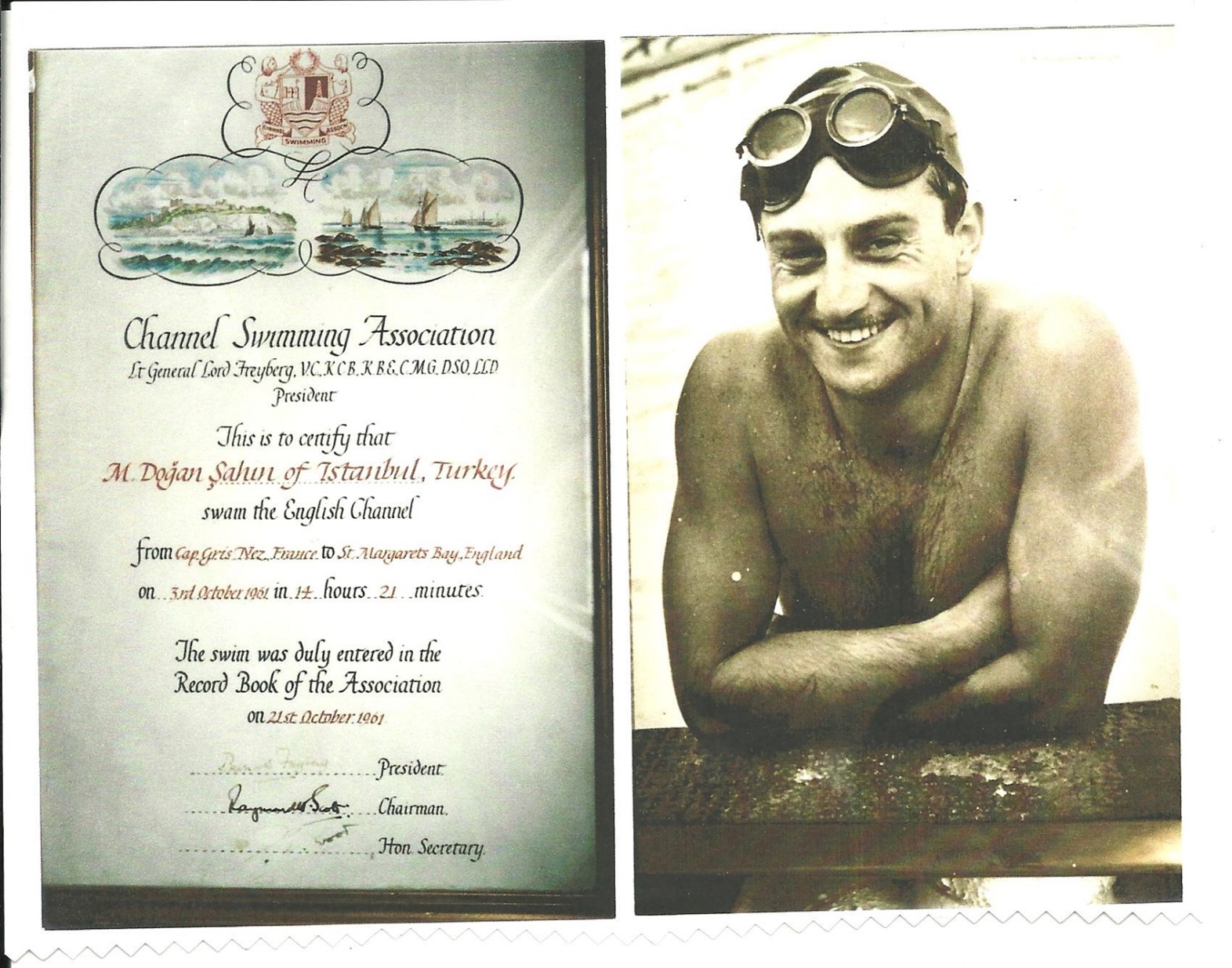 It is with great sadness that we learn of the death of Doğan Şahin in Instanbul, on the 10th January 2022, he was 91 and one of our oldest Channel swimmers. For over 60 years he had been a staunch supporter of the Channel Swimming Association and an inspiration to so many swimmers. Not only was he a great Channel swimmer and pioneer open water swimmer, but he was also an International sportsman. He trained as a civil engineer in his early years.

He frequently swam with Egypt’s top swimmer, Abou Latif-Heif. He was the first swimmer from Turkey to swim the Channel.

The President was delighted to catch up with Dogan in 2007, he was one of the organisers of the Bosphorus, Asia to Europe swim. In that year almost 500 swimmers took part including a handful of CSA swimmers, who all did very well. This challenge has developed into an extremely popular swim and in the most recent event there were over 2000 competitors.

In 2008 Dogan was hoping to join us at our Annual Dinner but the dinner coincided with two ceremonies in İstanbul, where he was being awarded the EFPM (European Fair Play Movement) “Chain of Merit” as well as a GAP (Southeastern Anatolia Project) plaque on the same day.

After his Channel success Dogan moved to new challenges and faster modes of transport. After many years of intensive training on a water ski around the island of Buyukada, he became National Champion of Turkey. On the 28th October 1994 he started his attempt to water ski from Mersin in Turkey to Girne in Northern Cyprus. As the crow flies it was a distance of 64 miles and to achieve this challenge he used a Yamaha Super Jet 650cc jet ski which can only be used standing. The jet ski was capable of 40 mph, but with only 18 litres of fuel it could only travel about 40 miles before running out of fuel and so his escort boat took a second ski for his use. Half-way through the challenge when the first jet ski was running out of fuel he ordered that the second ski be launched, he drew alongside it and jumped on board leaving the first Jet ski in the water. He continued his journey whilst the escort boat picked up the first jet ski. After 3.5 hours and 118 km he successfully arrived in Girne Cyprus.

The Board and members of the Channel Swimming Association send their deepest condolences to the family and friends of Dogan.