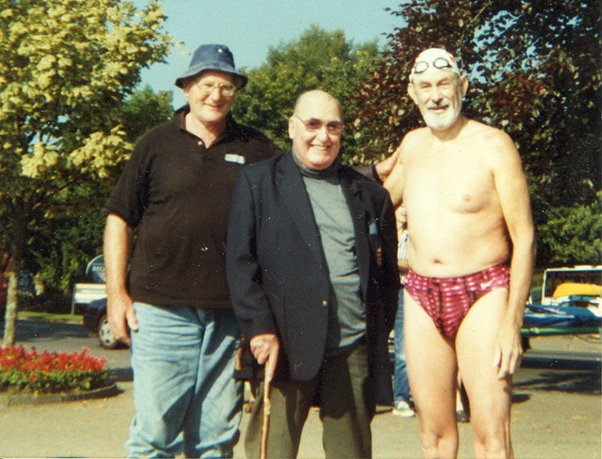 Sadly we have just learnt from Bryan Finlay that Godfrey Beaton passed away on the 5th February 2022.

Bryan wrote: The BLDSA formed some amazing bonds between us swimmers and administrators and Godfrey was a true reflection of those bonds.

Sadly, I just received a notice of his passing, at age 90. He was a long-term BLDSA swimmer, boatman and loyal supporter.

Apart from his own Windermere swims, he subsequently crewed for a number of our swimmers including Gerry Forsberg in Gerry’s later swims.

Then in 2002, Godfrey was my crew-person on my 20-hour Channel effort where, even at that time (20 years ago), he was suffering badly from gout. (Regrettably, Bryan was pulled out of the water on safety grounds, when only a few hundred yards from success).

In the intervening years, we’ve continued to exchange Christmas cards, along with emails from his wife Judith.

I was always so impressed by the wonderful handwriting on those Christmas exchanges.

I often think on Godfrey and will always remember him fondly.

In true BLDSA tradition, Godfrey was always a faithful and enthusiastic supporter of the Association and its swimmers.