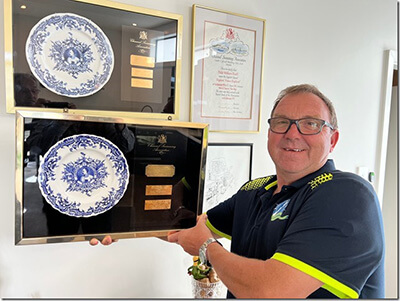 Following a record breaking three way swim of the channel by Philip Rush in 1987, Philip Rush was awarded several pieces of memorabilia. The New Zealand Sports Federation made these pieces into a presentable trophy. Years later the Channel Swimming Association expressed an interest in having for display the now new trophy.

As a result Philip Rush has made a generous donation of the original trophy to the CSA such that it may be displayed at the annual prize giving and at the Dover Museum.”

Photograph above: “Phil Rush holding aloft the original trophy with its duplicate mounted above.”