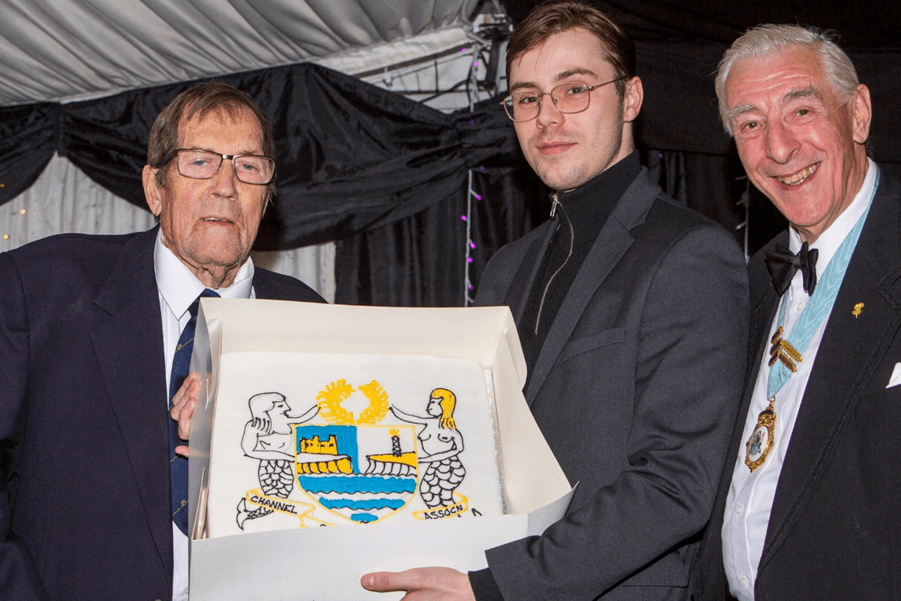 Norman with one of his grandsons holding his Anniversary cake at the Channel Swimming Association Annual Dinner 2021.

It is with sadness that we must report the passing of former Vice Chairman Norman Trusty, he was 89 and one of our oldest Channel swimmers. Starting his swimming career as a club swimmer he was Kent County Backstroke and Long-Distance Champion from 1954-57. As a member of the Otter Swimming Club he became a National Champion being part of the Otter teams to win the ASA National Championships in the Medley & Freestyle teams in 1953-54-55-56. In the early 1960’s he started taking part in the British Long Distance Swimming Association events and became Torbay Champion 4th July 1964. By 1967 he was ready for his first Channel swim, France to England 1967 12hrs. 5mins. He then swam from England to France twice in 1971 in 12hrs.24mins & 13hrs 41mins

Norman represented England in the First Windermere championship (10.25m) 6th August 1966 and again in the Third Windermere championship (25 km.) 3rd August 1974. He took part in several one-way Channel relays and with Hetzels Texas Volunteers set a two-way relay World Record on the 13/14th Aug. 1974. England to France 8hrs. 51mins. France to England 8hrs. 59 1/2 mins. England - France -England. Total time 17hrs 50 1/2 mins. When not actively participating Norman devoted his time to helping others achieve their ambitions. Highlights of his other activities include: Team Manager and coach for the swimming section of the Metropolitan Police Team &; for the inaugural championship of the London to Paris 1984 Triathlon Race.

Outside of the Channel Swimming Association, Norman worked alongside staff at the Dover Museum identifying and listing photographs of swimmers from the 1950 to 1958 Daily Mail Billy Butlin cross channel races. The photographs had been donated by Sam Rockett’s daughter. He also swum regularly in Masters events coming Champion in the LEN European Masters Championships in 1987.

He was inducted into the International Marathon Swimming Hall of Fame in 2003.

The Board and members send their deepest condolences to his wife Janet and family.